I’m feeling a bit overwhelmed right now with the sheer volume of photos I took while in Australia, finding time to process them all, and then deciding what outlets (social media, blog, website) to publish them all. I’m still…weeks…from having all the photos themselves processed, but before I get too much further along I wanted to take the time to provide a review and summary of the place I thought was the highlight of our trip, hands down…the “Canopy Rainforest Treehouses” (or just Canopy Treehouses) near Tarzali, Australia.

In planning our trip, we knew we wanted to spend time in multiple locations, to experience some of the variety Australia has to offer. The Cairns/Port Douglas area in the northeastern part of the country was one area we targeted, given the unique opportunity for access to both tropical rainforest habitat, and the Great Barrier Reef. While researching that area, I also read about the adjacent Atherton Tablelands and some of the birding opportunities it offered. That’s when I stumbled across the website for the Canopy Treehouses, and we made the booking.

We stayed in four different locations during our 3-week vacation, but the Canopy Treehouses just stood out in terms of uniqueness, and for me, opportunities to view and photograph birds and wildlife. And this is despite the weather being rather miserable while we were there. We stayed three nights in the Treehouses, and the weather for that entire time was marked by cloudy, cool conditions (for them), with a steady drizzle and somewhat foggy conditions. Not great weather for getting out and hiking the trails in the area (including on the property of the Treehouses), but we quickly found we didn’t HAVE to leave the Treehouse itself to have some wonderful experiences.

Rather than bore you with a verbose description of our adventures at the Canopy Treehouses, here’s a summary of the accommodations and wildlife we encountered, told through photos of the area. Click for larger views for some of the photos below.

What a great night from an entertainment perspective! My son and I went to see Avengers Endgame this evening. After 10 years or so and 22 movies, we were pretty invested in the storylines and characters, and the movie certainly delivered! Without giving anything away, it hit all the right notes and is definitely one of the best of the lot. That was followed by watching the newest episode of Game of Thrones. Wow…another satisfying and highly entertaining show.

But there’s one elephant in the room that I’m sure is on EVERYONE’s mind regarding the Marvel movies and the Avengers storyline. It all goes back to “Infinity War”. At the end of that movie, big baddie Thanos snaps his fingers, and BOOM, half of all sentient beings in the universe turn to dust…including many of our favorite Marvel characters. Thanos then retreats to an idyllic planet to “retire”.

The problem that was on EVERYONE’s mind after watching Infinity War…the audio that accompanied Thanos and his retirement. As the scene goes to this strange planet, what sound are we greeted with in the background? THE HAUNTING CRIES OF A COMMON LOON!!!! Now, Hollywood certainly is guilty of using the vocalizations of a few species in movies, particularly Common Loons, Red-tailed Hawks, and Kookaburra. But a Common Loon…ON AN ALIEN PLANET!?!? That was a new low.

When we got to the theater tonight, the lot was by FAR more full than I’d ever seen it. We got there 50 minutes early and still stood in a massive line to wait for our screen to open. While waiting, we overheard a theater working noting that the day before, they had 4,901 tickets sold, a record for one day. ONE THEATER, in a city of 180,000, and they had almost 5,000 people visit for this movie! And what was on EVERYBODY’S mind? That’s right…Was Marvel going to have a major bird-related faux pas again?!?!? So as the movie got going and we caught up with our favorite (surviving) characters, I, like everyone else in the theater, had my ears tuned to the sound track. Would we have a similar ridiculous audio misstep?

It was relatively early in the movie where I heard, yes…THE CALL OF A COMMON LOON!! AGAIN!!! But alas, THIS time Marvel got it right!! It was a stage in the movie where we visited Tony Stark and a home on a lake. It looked like what might be typical northern woods surrounding the lake, and yes, this was on Earth. A PERFECTLY normal place to potentially have a loon call!

WELL DONE MARVEL!! I hereby brand “Endgame” to be a total success, and at the end of the movie, everybody was clapping, which I’m SURE was also related to the proper use of a Loon call! 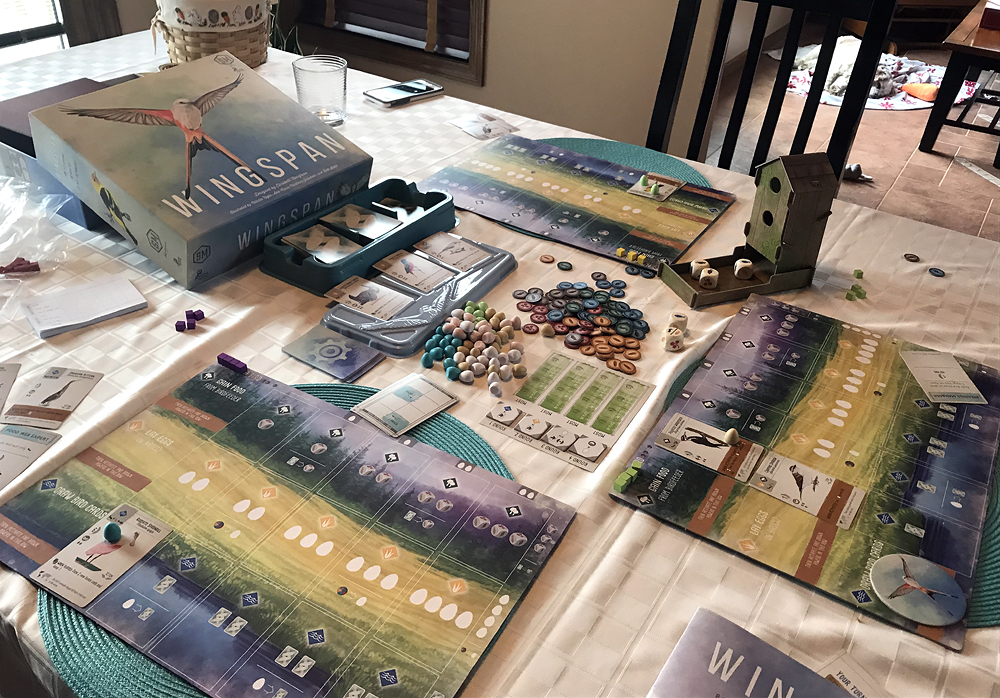 We had a very nice relaxing day with the family at home today for Easter. A delicious meal of cheesy shrimp risotto, some coconut cream pie, and a day of games. Today was the day we broke out the new “Wingspan” game! The game has gotten incredible reviews and quickly sold out the first few printings. When I saw a new printing becoming available, I ordered right away.

I’m glad I did! The game is a 4-round strategy game, where you’re stockpiling birds on your “network of wildlife preserves”. There are 170 different birds, with cards for each detailing that species food needs, nesting capacity, habitat needs and “special abilities”. It’s a turn-based game, where a player chooses whether to:

The game itself is deceptively simple once you understand the rules. Your choices don’t go far beyond the options outlined above, but once you play it you realize the need for strategy right from the start. For example, the game is played in four rounds. Each round has a specific scoring goal. For example, Round 1 may focus on providing points to players who place the most wetland habitat birds in their preserve. Round 2 may focus on cavity-nesting birds that lay the most eggs. The priority for each round is chosen at the start of the game, so long-term strategy comes into play. You want to maximize your points for the current round, but if you don’t also set yourself up for scoring priorities in future rounds, you’ll likely do poorly.

By the end of the game, scoring is tallied as followed:

After four rounds, you add up the final scores using the 6-category scoring system. From what I’m seeing online, final scores for a winner are typically between 65-85 points.

At first it’s a bit confusing, but once we watched this short YouTube video on the rules of the game, it really is quite straightforward. Straightforward, but rather elegant! While the rules themselves may be straightforward, there’s definitely quite a bit of strategy involved! In the first game we played, the winner ended up with 65 points…on the low end of a winning score from what I’ve read. But now that we understand the rules and the strategy more, I’m sure our next game will be higher scoring.

Great game! It’s also very well put together. Materials are solid, and the artwork on the cards is absolutely beautiful. I love the “bird feeder”, a device you construct that allows you to roll dice that represent foods available in the feeder. A few times I caught myself just looking through the cards, as it’s fun not only to look at the beautiful artwork, but to see the special attributes and abilities the gamemakers assigned to each species. A really enjoyable game, and I can see a lot of replay value, given that each game’s goals and birds will be different.

Highly recommended, if you can get a copy! And hey, if my non-birding teenage son can get a kick out of it and ask to play again tomorrow, it’s a great indication that the audience for this game goes far behind just birders!